It's been a busy week so far and HOT - unseasonably hot in the 90's in April!!  The AC has been on, breaking my rule of never before May, but sweltering in the house was not an option.
The horses are doing well, I can't believe Java and Missy have not foaled - they're orca size, but I know horses can get bigger, its just halfway through foaling season and in zombie mode - I want to sleep!!!
Anyway, on to #3 foal.   Calypso's foaling was textbook and unconventional at the same time.  I've been watching her since mid-March, and seriously since April 1st.  She's had a few foal losses, although non that I can attribute to her, more ID10T errors, but that is another long story!  With this one, she's been keeping her legs crossed and refusing to foal.  Apparently Sarah and Chiclet were not the buddies she wanted around her at foaling!
I had been out around 12:45 a.m. giving the preggies some alfalfa so I could check all of them. I decided for some reason to open the gate allowing the two groups back together - it gives them more space and bottom line I'm a bit unconventional with my mares - they're all use to being together and isolation is torture for them - at least they think so.  Besides Miss April has been getting in with them she's way to curious!
So, I opened the gate and was checking everyone - Calypso waddles through and starts neighing - her daughter Jamaica answers and comes running.   They look like two bookends, as wide as they are tall!
**Short digression -
Jamaica is Wesco Farms Jamaica Me Crazy - sire is Little Kings Echo Diablo -and she's a maiden that we're crossing our fingers will be issue free her first foaling.  I will have five generations of this line, so that will be exciting in itself!  Jamaica's the smallest bred mare other than her dam and we waited until she was a full five years old to breed her.   When we thought the kids would show Jamaica was my daughter's favorite - this is their first show and our first clipping attempt - pretty pathetic I know! ** 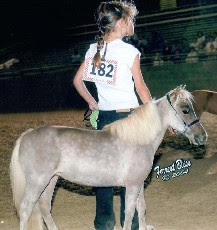 Back to the birth.
Calypso is walking in a very determined fashion to the area where the pregnant mares are fed - this is about 400 feet past the gate, thru two other gates/smaller paddocks.
I'm watching the mares (by flashlight) making sure no one is bothering Sarah and April.  She seems thrilled to be back with her buddies and they're all acting fine.
Calypso reached her destination the dry dirt area by the water trough (glad she missed the overflow muddy area).   All of a sudden she lays down, rolls, stands rolls again and goes down - stiff legged.  I run over and her water broke.
I'm thinking it figures you stinker!!  Here in the dirt with all the others around and now you want to foal!  I forcibly make her get up as the sac and a hoof are emerging!  I drag her by her mane into the runway next to the house.  No easy task, as this is half the way back we just came, but I'm pulling her with one had, flashlight in the other, screaming like a banshee for help - cell phone is in the house of course!
I get Calypso into the run, and she goes down again.  I look fortunately its two hooves and a nose coming out - the sac is still intact so I leave that and just keep traction.  My daughter comes running with the foaling kit as I bark orders to my fantastic assistant (thank you Anya), and she retrieves a few other things for me.
I'm keeping traction on the foal, but allowing Calypso to do the pushing.  Out comes foal and as soon as his (it's a he!) hips were cleared, I broke the sac and began cleaning off his head, and massaging him awake.  We're happy  - healthy, black and white pinto, cute and all the right parts in the right places!
Calypso apparently un-thrilled with this process, jumps up, breaking the cord and walks away!  Most of my mares are way to curious about their babies and would be all over them, but no she takes off walking around.
So we dry the foal off (he's on a clean sheet), towel him fairly vigorously, do all the foal checks as normal.  By then she's passed the placenta - this is all in about 15 minutes from her water breaking.  I have my daughter halter her so we can introduce her to her son.  She's not interested at first, but we proceed with Calypso's post foaling work and start to milk off some colostrum for the foal.  He's laying there and finally she goes 'Oh! Is that mine?'  Now we have determined mom wanting to see her baby!
He's more active although unable to stand on his own yet, so we hold him up to give him some Foal Response and a bit of colostrum.  Then put him back on his towel and leave them alone for a few minutes.  My son came home - the uber-milker - and he milks out twice the amount of milk/colostrum that my daughter and I could get - so I gave some more to Zydeco and froze a bit of it.  We use Udderly EZ (no I don't get paid, but I do rave about this product!!) as it makes milking a mare soooo much easier!
We ended up milking Calypso on and off for about 24 hours as she has fairly flaccid nipples that aren't quite inverted, but are hard for foals to latch on to at first.  Zydeco was wearing so much milk on his face I wasn't sure he was actually getting any!  But everything is going fine now.  She's been doing great with this baby and if the rest of the foaling season goes like this we'll be very happy!
Introduction - Here is -
Wesco Farms Zydeco
(Las Doradas Bonus Bucks x Las Doradas Calypso Queen) 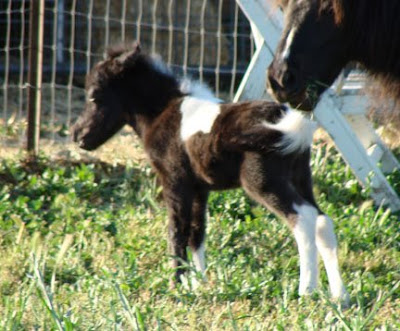 His name is in keeping with the whole Cajun/Creole flavor that began with his grand-dam Mardi Gras!
Posted by Wesco Farms