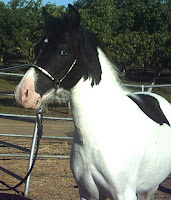 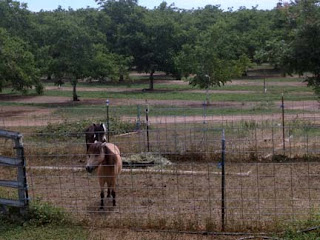 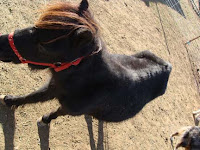 How does the horse ‘lock’ the pelvic limb? Horses have the ability to lock (or fixate) the pelvic limb in extension. This is possible due to the unique anatomy associated with the horse’s stifle joint. The proximal aspect of the medial femoral trochlea is shaped similar to a hook or ski jump. By placing the space between the medial and middle patellar ligaments over this hook, horses can "lock" their pelvic limbs in extension. Once locked, minimal effort is required to maintain limb extension. A similar locking apparatus in the thoracic limbs allows horses to sleep while standing. Therefore, patellar fixation while standing is a normal process in the horse.


What is ‘intermittent upward patellar fixation’? Although patellar fixation is normal in the standing horse, it can produce pelvic limb dysfunction if it occurs during exercise. Inadvertent locking of the patella over the medial femoral trochlea prevents normal flexion of the affected limb(s). Consequently, pelvic limb asymmetry and lameness frequently become evident.

Horses with intermittent upward patellar fixation will exhibit clinical signs during their attempt to flex the pelvic limb from an extended position. In acute severe cases, the pelvic limb may stay locked in extension. The horse may not be able to flex the stifle and tarsus without assistance. In some instances, the condition may temporarily resolve only to recur after taking a few steps. These signs are quite obvious and diagnosis is relatively simple if the condition is severe. Most of the time, however, there is only a "catching" of the patella as it slides up and over the hook and the limb does not truly lock in extension. In this situation, there may only be a mild pelvic limb asymmetry or lameness. This type of lameness can be easily confused with other problems and therefore may present a dilemma in regard to accurate diagnosis.

Non-weightbearing pelvic limb lameness
Visible wearing of the dorsal aspect of the toe/shoe may be apparent.
Resistance in the canter
Consistent lead changes or cantering on the wrong lead
Swelling, heat, and/or pain may be associated with one or both stifle joints
The horse drags his hind toes during exercise
Resistance and/or difficulty when walking up and down hills, or when backing up
Lameness is most severe when the horse is first taken out of the stall
Lameness becomes more obvious following an extended period of stall rest
The horse does not respond to anti-inflammatory (e.g. Phenylbutazone) therapy
As with many cases of pelvic limb lameness, secondary abnormalities such as thoracolumbar ebaxial (back) and proximal thoracic suspensory ligament soreness are also present. These are generally detected during the passive lameness evaluation and are suggestive of chronic pelvic limb asymmetry/ lameness.

How is upward patellar fixation diagnosed?

Clinical signs are characteristic and, if the limb is locked in extension (i.e. the case is severe), diagnosis is simple. As previously mentioned, however, most cases are mild and diagnosis may be more difficult. A detailed history and careful clinical evaluation are essential parts of a proper workup. One helpful diagnostic aid involves placing the horse in one or more situations where prolonged pelvic limb extension is normally required. Such situations include walking up and down hills, the trot-to-canter transition, and backing up. When confronted with these situations, the affected horse will either 1) demonstrate upward patellar fixation by temporarily locking the pelvic limb, or 2) cheat by switching leads, swinging the limbs to the outside, avoiding pelvic limb extension, etc.
Many times, a slight hitch or "catch" is visible as the pelvic limb begins to flex from an extended position. This "catch" is most easily detected by visualizing the point of the hock as the horse picks the limb up to advance it cranially. Infrequently, an audible "snap" or popping sound is also evident during exercise (particularly walking).

In many instances, upward patellar fixation can be produced in affected horses by manually forcing the patella upward and outward. The examiner may actually be able to keep the pelvic limb locked in extension using minimal effort.

Since the problem is usually secondary to conformation and/or level of fitness, it is almost always bilateral. However, affected horses historically exhibit clinical signs in one pelvic limb. It is not until the more affected limb is successfully treated that a problem in the contralateral limb is manifested.


How is upward patellar fixation treated?

Currently, there are 5 forms of treatment for intermittent upward patellar fixation:
Other resources: