At least the AMHA portion of the stallion reports that is! I still have the AMHR to finish, but as they don't have fillable forms yet for their PDF files, I'll have to hand write them.

Not awful, just a pain.
Posted by Wesco Farms No comments:

Jack was colicy this a.m. He's had these re-occuring bouts of colic since he was born, even after his week in ICU at Loomis back in May.

He was a bit bloated, his gums were a good color, eyes were bright, but he was boviously in distress. His temp was 98 degrees, and he had obviously been rolling, so we double blanketed him, then gave him the treatment! First 1/2 cc of Banamine, then 50 cc of mineral oil, 10 cc of pepto, followed by 100 cc of warm water. He started acting better once he passed some gas and had a bit of diarrhea. Once he felt better he went to sleep - poor baby. Anna sat with him while he took his nap. When he woke up, we put him in a pen with Jazz for company. His appetite came back, so we put him on grass and he had a nice meal.

We did give him a second cocktail around 4, and turned him out with Jazz. Jack raced around screaming for his mom, so we put Celena in and he had a long drink. He's over 5 months, so definitely could be weaned, but I think she's more comfort to him than anything else.
Posted by Wesco Farms No comments:

Boys will be boys 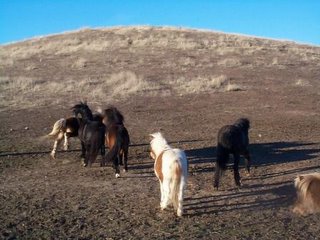 We turned Little and Roger out with the rest of the bachelor herd. For those that haven't been here - the boys have a 20 acre section of hills, valleys and flat treed section of our property. There is a 1/4 mile common fence with the mares and the hills overlook the valleys were the mares hang out. It was the first time Roger's been back with the boys in over year, and Little has never lived in a bachelor herd to my knowledge, so we were prepared for any fighting.

We put Little in first, and he immediately took off up the hill, ignoring Ray and Demon (they've made a pact to co-rule the stallion pasture!). I was surprised as they took off after him, but then realized Little had never been in a pasture larger than about 2 acres in many years, so he was out to explore the new territory! He disappeared for about 20 minutes, and returned with all the boys in tow. During his travels, we put Roger in, and he was thrilled - took off in another direction.

The boys came back sweaty, squealing and having a good time. No fighting fortunately! The younger boys were hanging out for scratches and just observing the older guys strutting and galloping around the hills.
Posted by Wesco Farms No comments: