So much for the daily blogging!

I know I could, but to write 'we fed the horses' or 'we trimmed the horses today', seems a bit boring and not worth anyone's time to read!

I've been looking at some different article type posts that I may add as my taxi service (driving a teenager) will keep me on the laptop at Starbucks for a few hours a day. The price of living in the country didn't include Starbucks stops and hours away from home 'waiting'! rofl

It's been hot and dry. The horses have turned the pastures into dirt pretty much as we've had no rain in months. Fortunately alfalfa is under $10 a bale and grass hays hovering around $12..50, so we're saving a few hundred dollars a month on just hay cost alone.

Tomas was out once, we had to cancel twice due to unexpected events, so everyone's getting long toed again. He's coming this Friday, now the choice the boys or the babies? Both are in need and he can't do all of them at one time. /sigh

I know I've been posting to Twitter, but Vanna managed to go for a double eye injury. Her and mom, Jamaica are in the backyard (my recovery room) as Woody, Rohan and Ringo have claimed the other small paddocks. Vanna is doing well after a few days of treatment. The right eye looks like it will heal completely and she has good sight in it. The left...I'm hoping she won't need it to be removed. It's improved, but she really nailed it. We're giving it a few more days to see if it continues to improve.

Her aunt (Jamaica's half sister), Missy was my first eye injury to deal with. We treated her around the clock for 10 days and her eye got worse and she went in for a removal. Missy was only three days old when she lost her eye, so she's always got on well without it. (BTW - Missy lives at Jenn Davis and is due with her first foal this month.)

Sooooo, we're going to continue to monitor the mighty munchkin that is Vanna and hope/pray she doesn't need to lose her eye.


Woody
Woody has lost maybe 5 lbs., lol! He looks a bit thinner and he's definitely alot more comfortable walking, and still hating his grass hay diet. (I've cheated and give him a couple handfuls of alfalfat sprinked around his paddock) He'll get trimmed Friday so hopefully Tomas sees lots of improvement in his hooves. He really hates being locked up, as Rohan through the fence is absolutely no companionship. 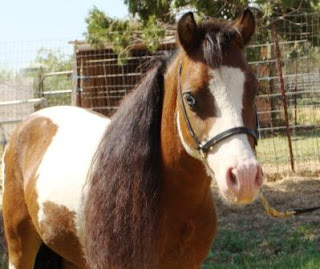 Token, one of our super sweet geldings, went off to become a 4-H horse and project for a friends son. I think they'll do super together. While Dee was here, we got to talking about Flash (Vegas Views Jumpin Jack Flash) and Dee remarked how much she liked him. So we struck a great deal and Flash was loaded up with Token for the ride up to Auburn. Both seem to be doing well, and Flash is loving the one on one attention Dee can give him that I couldn't. I sent an email to his breeder, she's pleased he's in a good home with a clause that if he can't be kept there first rights go to her or me! A real win-win for Flash!

Just today, Krissy from a blacksmithing school came by with the intent of getting two minis. One as a companion to her hard keeper mare and another for her companion, educational tool at the school. Peanut was an immediate yes - this will be a great home for her. As I've always felt Peant was not of the quality (had the color and size) of a good breeding animal, but hesitated to sell her to someone that would try.

When we went through the boys pasture, Krissy at first was interested in one of the blacks - Raider (blaze, one blue eye) or McLuvin (ultra friendly no white), but while she was checking all the boys - Thunder Bluff (we've changed his name a gazillion times as nothing seems to stick, but it's Little and Libbe's 2008 colt) kept following her, poking his nose in her face - basically giving her the 'what about me' going over!

Finally she did, which made him really want more, so she decided he was the one for her! He loaded well into her trailer - considering it was his first time - and we caught Miss Peanut who gracefully belly flopped her way into the trailer - hey the back of the trailer step up is above her leg height! So off they went to I'm sure a fantastic home.
Posted by ziboo No comments:

July sped by - hot and hotter days. The horses seem to fair well in the heat, (my assumption as no one is sick and they stand on top of the hill in the blazing sun instead of in the shade or in the shelters!)

A couple of farrier visits, but I still feel like we aren't caught up. I don't know why, the records say everything is okay, and Tomas is scheduled out through the end of September so... hmmm.

Hay prices have been a bit more reasonable and really excellent quality. The last alfalfa at $9.65 and mountain pasture at $13.30. The alfalfa is close to half what it was last winter. I wish I could store more than 100 bales at a time. I'd be snapping this alfalfa up - the horses aren't leaving a piece of it around!

Since we didn't have any vet visits this month, the dog felt the need to rip her leg open, after hours of course! Our vet referred us to an emergency clinic - which turned out to be a total joke. We take Leilah in and after an hour they come in and the vet tells me it will be $799 to $1,100 to stitch her leg up!! I literally started to laugh and told her she couldn't be serious.

She was but seemed very embarrassed. I told her give me my dog, I'll take her to our vet in the a.m.- heck too many horse injuries I was anticipating a $250-400 bill. She did end up cleaning and wrapping her for free as I think she really did feel bad, but she's an employee there not the owner. I really wanted to tell them all how grossly unfair it was to overcharge this way, but only mentioned it to the vet.

So, the next day our vet $300 as anticipated. I'm so glad my animals plan injuries out, but wish they'd get together and ALL decide to be healthy for a year or two!


Other news - my son has moved out again and this is likely to be permanent, so lost my ranch helper. I need to find someone reliable and trustworthy to help out around here as my daughter is entering the busy teen life this fall. So the next two years until she drives, the mom-taxi is going to be more in demand than not.

This segued into some re-evaluation time for our herd. I had already committed to not breeding this year, and next year is doubtful (I'm dying to try Topper out though!), but we need a major reduction in our workload as the next two years I just don't see a lot of horse time!

So, I've slashed the prices on the horses (some very drastic cuts) most of the colts/stallions are in the $650-900 range, and the mares are all over $600 to a $4,500. Hopefully we'll get them into good homes, I'm still going to be picky about that.

Part of paring down, I pulled all my daughter's 'show clothes' and photo'd them all along with the 'how to' videos we never watch. I'm going to post them to our site for sale. I'd love to say I'm going to go through all the horse blankets/halters/stuff and list that too, but it's highly unlikely!!

DIPPER
We finally did manage to meet up with Sherry and trade horses. She now has her black and white pinto stallion (Bonus Bucks) and I have Dipper back after many years of wanting her. 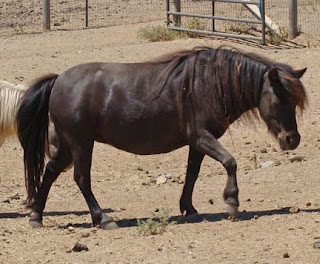 It's so funny as Bonus Bucks (sorry Sherry I've already forgot his new name), has really gone full circle over his nine years of life, living within a few miles of where he was born out on the Northern California Coast.

Dipper is double bred Buckeroo. A Buckwheat daughter and Buckeroo great-grand-daughter with heavy Bond breeding on the bottom. She's back where she lived for her first two years of life, still working her way back into the herd - it's a tough crowd here - so many alpha mares that all want to be queen! Right now Twila, Val and Java have made it there mission to make sure she understands where she fits in the hierarchy and that only the furthest pile of hay is hers ... only if they don't want it.

Oh well, I've watched other mares run the gauntlet here, Savvy did last year, and Sonnet and Remy before her. 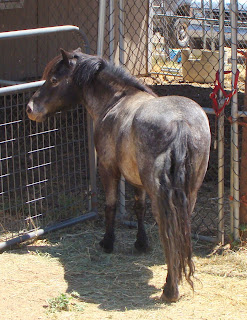 Woody one of our first minis (my husband's only horse) has developed joint problems because of his hooves. Apparently he grows way more toe than heel, and his every 8-9 week trim isn't working after 10 years. His front left is the worst, but all four were a bit inflamed.

Tomas (my uber-hero farrier) trimmed him into some ugly looking hooves - really cutting back the toe, so at least Woody seems more comfortable. He grows so much toe - I've always called him the Shetland-hoof horse, but it's finally catching up with him. Doesn't it just figure though the $500 pet mini costs me more to trim than the one's that were many thousands of dollars. /argh

So Woody locked up in the run off the backyard/garage area and he's just not happy about isolation and his new diet - grass hay is not his idea of living. I've been sprinkling a few handfuls of alfalfa around his pen - but he's still thrilled with his accommodations. Rohan (the jumper) is penned next (six foot high ex-dog kennel for the win!) to him and Ringo has an adjacent pen too. Neither are wanting to buddy up with the gelding, so I've been feeding the mares with foals extra grass hay along his fenceline. I know the piglet mares will hangout with him for hay!
Posted by ziboo No comments:

I was out feeding this a.m. and actually took the camera. How do they actually know I'm trying to take photos? If I don't have a camera they run and jump and play. Camera they clump up and hide or are two inches from the camera lens.

So, many bad photos later, pulled these few of the foals. Practicing with Picasa's collage feature -


Over all very happy with Frenchie's foals and Ringo's fence jumping pretty daughter!

These are the 'tall' foals, the three munchins (April, Vanna and Zydeco) the photos were truly awful. April being the character she is was in visiting Woody today - she is about the size of our Australian Shepard, Sabrina, so finds her way into most anything. Vanna is even smaller, but not always as adventurous!
Posted by ziboo No comments: