Manic Monday, but its Friday!

Nothing like waking up at 5:35 a.m. to the sounds of stallions screaming. I assumed it was Flash having a shouting match with either Ringo or Bonus Bucks, as we had just moved him in the runway to prep him for his upcoming departure.

Let the dogs out, I peek out the bedroom window - hmm! An extra horse in with the mares. Nice Rohan, how did you get here?

Wake up Anya to come help and off we go to catch an untried stallion that things he's gone to heaven! All these mares and no competition. 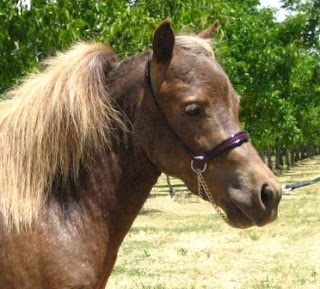 Fortunately (most of the time that is!) my horses see an open gate as an opportunity. We all know the 'herd' mentality too, so get one going through the rest are bound to follow! Well Rohan had selected, Patsy, her sister Holly and their dam Maria as his targets to be herded, so they were a bit slow to get moving. We had everyone else penned up, and finally separated Rohan.

No one looked the worse for wear, the geldings - Ray, Token, Ivan and Dash - did look like he'd been after them but no blood!

So no serious damage, other than needing to file another stallion report. I don't know that anyway was bred, but I always assume!

We grab Rohan and take him back down to the stallion pasture (this is about 1/4 mile away), I'd fed the rest of the boys far from the gate, in hopes we'd be able to get Rohan back inside with little fuss. I'm holding the gate, Anya on her way in loses a shoe, she lets him go hopping on one foot, I'm trying to close the gate, Demon slips past us on a mission.

All we see is a red roan blur in a full out gallop heading towards the house. At least he's on the outside of the fences!

We hop back in the van race to the house - no Demon! We cruise by the mares they're all eating peacefully - where'd he go. I see my husband emerge from the house pointing towards Bonus Bucks pasture. We notice he's half through the fence - oh joy. Heading directly for him like Jaws in the movie is Demon. We jump out of the van race over to stop any pending fight. Demon takes off with Anya in quick pursuit. In the meantime I'm trying to untangle Bonus Bucks from the fence. He's managed to plant both front legs through different parts and stick his head through another opening. 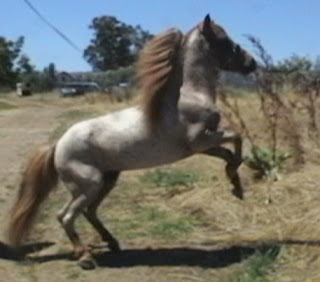 Anya catches Demon and ties him up while my husband and I are trying to stick Bonus Bucks back through the fence. My DH, finally lifts him back though and Bonus Bucks takes off. I feel bad for hubby - he was just at the chiropractor yesterday - lifting a 200 lb horse is not highly recommended I'm sure.

We run Demon back down to the stallion pasture and all is at peace again.

It feels so very much like a Monday. /sigh Hopefully that is all the excitement we're having for the day!
Posted by ziboo No comments: