It's one of those days/stories, that you can only laugh about in retrospect!


Yesterday, Thursday February 19, 2010, my son had his best friend over for a visit. They wanted to hike on the hills and his friend's girlfriend wanted to see the horses. So off they go, beautiful day almost 70 degrees in February. A light breeze, the grass is growing, early spring flowers and trees in bud - a perfect day.


While they were hiking the 'couple', being in the post teen angst filled early days of a relationship had a minor tiff. Somehow the three of them were separated. (I know but we we're that age too once - lol!) A bit more hiking back and forth and a minor shouting match on the hills, the couple make their way back down off the hills. They had made up enough to leave in one car (yeah!) and off they go (the stress of young love OMG!), about 4 o'clock.


Around 8 p.m. my son's friend calls and they're chatting. My son then tells me "Oh by the way.. guess what the girlfriend discovered!" While wandering around on our 63 acres of hills she had discovered a black mare with a small black skinny baby. Yeah for finding the sneaky mare - big marks down for not saying anything for FOUR HOURS!


We had a short debate on could she have been mistaken as she's not a horse person and minis, people often call them babies because of the size! So could it be one of the smaller horses next to a taller one? Maybe one of the two year olds (a couple are in the 30" range)? Maybe. Finally it's a better safe than sorry situation, so we change into gorgeous ranch attire (mud shoes/boots, the oogly clothing). We have to go on foot as the ground is almost to wet for the Jeep and in the dark, just not lots of fun! Plus getting the Jeep stuck in the middle of our property...AAA won't help us there!!


Off we go, Maxim, Anya and I to comb 63 acres of hills on foot to look for a BLACK horse with a BLACK foal in the dark by flashlight! Choice words were mumbled by me as we went up and down the muddy hills, dodging the abudance of rocks lacing our hills, not to mention the many small streamlets and two major streams.


When we do find the horses - at the other end of the property - the mares of course are freaking out why we're out there with flashlight's in the dark. So the whole herd starts running. We're trying to identify all the 'black' horses as they race past by flashlight and finally spot the mystery 'black horse' and foal at the back.


I was suspecting Chiclet that looks very likely pregnant, but no surprise! It's ET (Las Doradas Etoile de Mar) my first mini! Now we haven't bred ET in five years, and apparently she hasn't liked not being a mom, so took matters into her own hooves so to speak.


We finally chase the horses down to the house, while I'm sure I'm going to have a heart attack in the dark stumbling up and down hills. My son grabs her baby. Well she's having a screaming fit that she has lost him, her new son is kicking the crap out of my son in his baby 'I don't want to be eaten by you, human' way.


So I grab her foal, we're shining a flashlight on him, calling her over and she's racing around screaming. Finally ET is like 'oh there he is' and we lock them up. All of this is accompanied by Libbe's constant loud screams (she sounds like a 16 hand draft horse - very loud and deep) of baby alert - she loves foals - and will steal any of them she can!


We check the foal - a colt. Obviously very alert and has been nursing and not a few minutes old either. Check mom - full bag, no discharge, alert, healthy and very smug! Give mom some Ivermectin and foal Foal Response. Blanket baby Kiega (long story on that name, but fits him) and leave them alone.

So here he is - Wesco Farms ET's Secret Affair "Kiega" 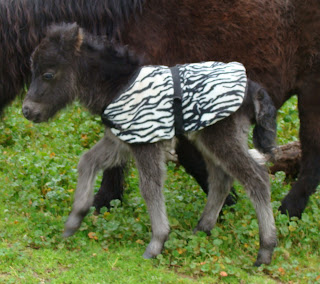 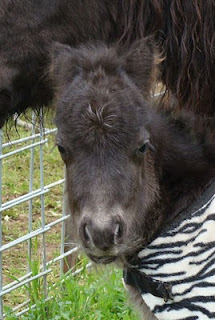 Check out the head shot - he has a moustache!!!
The truly ironic part of this, just the day before she foaled Kiega, we were watching her walk up the hill and I remarked to Maxim, damn ET looks pregnant. We both did the naaa! Can't be. Darn mare proved me wrong again.


Now to figure out the mystery of when and how she managed this. Suspect number one is Ringo as Kiega looks to have blue roan ability going on! The only issue Ringo did NOT have access to the mares unless she very willingly backed up to the fence last March. So another guess daddy foal. Thank goodness for DNA/PQ testing!!!
Posted by ziboo No comments:

Nothing exciting today - well unless you consider scraping moldy, slimy alfalfa out of the hay barn fun! The rain this past month, some of which was falling in a horizontal fashion, managed to get in and the loose hay on the floor near the windows turned into lovely glop!

The pile of 'clean' hay we rake into a pile received enough moisture to be a lovely pile of mold! The mold spores - ugh! So off to the compost pile with that as well. I have to say we've had some gorgeous alfalfa this last couple of deliveries. The horses are loving it and staying in good body condition.


The horses are all doing well. Leelee is definitely pregnant from Ringo, due in May. Need to look up his 'jump the fence and cover LeeLee day'. Chiclet I'm still on the fence about, but might be as well from Rohan's leap! All the rest of the mares show no signs of those two's attention so crossing fingers its only one or two unexpected foals this year.

Spring is in the air - a bit - as the mares are starting to show a bit of interest in the stallions! I'll be glad when the rest of the 'sold' boys leave this month. Less accidents - lol! Although the biggest culprit, Ringo, will still be here.

Time to order and get our vaccinations completed the next two months. So, inventory of syringes, etc., is in order.


I had planned to get to all of Anya's show clothes and post prices, etc., but unexpectedly had the fun of PC cleanup/defragging my son's computer. That and I've had the brilliant idea of backing up all my music to a HD! Never knew I had so many CD's until I started that project! 6.6+ days of music as of last count.
Posted by ziboo No comments: