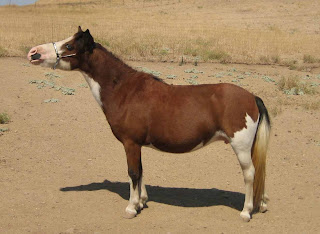 We first saw Callita in 1999 when purchasing our first Minis.  She was and is truly eye-catching with her gorgeous color, presence and attitude.  Daughter of National Champion, Kay’s Calico out of Hobby Horse Patches, Callita has the wonderful movement her sire was known too.
As Callita wasn’t for sale at that time, we ended up purchasing her daughter (Mardi Gras) and son Val (Spiriwalker) a year later.  While both have since gone on to other homes, we still have down-line through Mardi Gras (Calypso>>Vanna) in our breeding program as well as Val’s full brother Eagle (Una>Blessings).  The unfortunate side affect, is we’ve lost Callita’s knockout color, but have had three generations of under 28” in Calypso’s line, while Una is keeping us in the B size with her daughter Blessings.  We also have her daughter Baybee (my Callita replacement), sired by Grosshills Littleman’s Anticipation, which we look forward to continuing Callita’s line yet again.
Frenchie 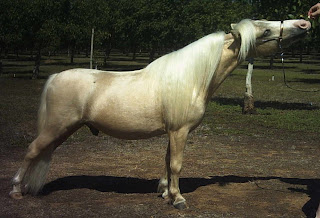 Her son Frenchie (Wesco Farms Frangelico Flashback, sired by Little Kings Russian Revelation) has sired some of our nicest foals and is now in as a breeding stallion and learning to drive.
We do miss Frenchie, but not his jumping abilities!!  Although we’re very happy with his contribution this year, joining his spectacular foal crop from last year, Fifa (Wesco Farms World Cup Special FF), out of his half sister Bayee.  Proving good lines do cross well!  We’re expecting a couple more ‘surprise’ foals from Frenchie this summer as well.
All her down-lines have Callita’s great conformation, presence, performance ability and abilities.
Callita lived here for two years, as the lead mare of our substantial broodmare band, before we were able to purchase her in 2004.  Not aggressive or mean-spirited, she’s been a good leader with her best friend, Libbe until she was retired in 2008.  We’ve enjoyed Callita and she’s on the very short list of horses that stay no matter what.
She’s proven to be a magnificent broodmare over the years. Producing fourteen foals, many which are in breeding programs around the world, including two of her sons who have gone on to be highly successful stallions in their own right. The full brothers Las Doradas America Eagle and Doradas Spiritwalker; sired by multi-National Champion, Sugar Creek Geronimo. One of my all time favorite stallions (he’s also the sire of Libbe one of our mares).
Eagle (top) and Val (bottom) 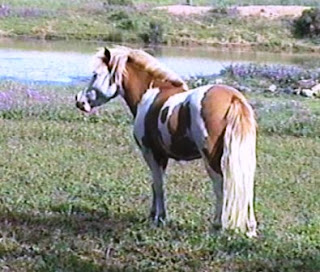 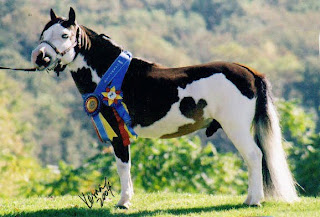 Callita’s production record secured her a place in Miniature Horse Mares; Past and Present book

written by Pat Elder.
Over the years we’ve infused Callita’s bloodline throughout our herd as she just has so much to offer that we like to see in Miniature Horses.  A superb broodmare (easy cover, foals out well, lots of milk), along with a natural hardiness, great conformation, good hooves and just a general all around healthy mare, everything we like to see kept in Miniature Horse breeding.
Callita had her last foal for us in 2008 at the age of 20.  She was getting very pulled down after foaling and we were having trouble keeping weight on her, so we retired her, against her will.  Moving her into our retirement herd, she lost her position as lead mare of the herd, but happily rules our retirement herd (which includes our bred mares), training our successive generations about respecting the lead mare!
Two years of being in the retirement herd, she’s been fat and sassy and ready for love.  For some reason this year her eye fell on Demon (Little Kings Dream Demon), whom we adore but haven’t used much for breeding.  Ignoring, Ringo, Topper and the other boys she would literally scream at Demon every chance she could.  So we finally gave them one cover – literally – and she seemed happy with that.  Knowing Callita (and the rest of my mares) one cover is often all it takes!
Callita, 22 years young, May 2010 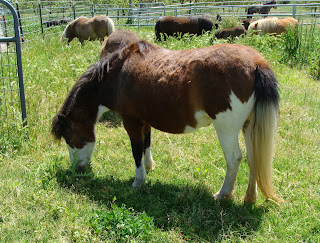