Las Doradas Etoile de Mar, (French for the star or March), affectionately known here as ET,was our first Miniature Horse along with her daughter Silhouette and nephew Woody that we purchase in 1999.

ET's been a wonderful mare to learn about Minis with as she's very intelligent, a bit hard headed in what is right (in her opinion), tolerant of my noobish ways over the years and a great teacher.

She's a fantastic broodmare - gets pregnant usually in one cover, foals out without assistance and is a fantastic mother - all the desired attributes.  Along with a sound mind, robust health, smart, well conformed, great feet - things I consider very important in a breeding program.

We bred ET successfully for six years and in 2005 decided to retire her.  Not for any glaring fault or bad genetics (she is a bit older style for my current very leggy tastes, but not a walking dumpling in anyway!), but we never sold her foals, so had to stop collecting them! 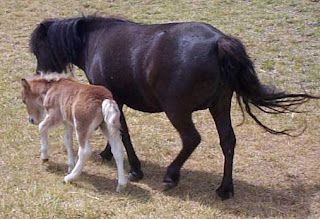 Silhouette, Una, Ray, Bug (doa), Ivan, Rohan and Cookie were her contributions up to that point.  She tends to breed somewhat to the stallion as her foals are all over the board on looks (and heights).  She is black and gifted us with three black daughters, one silver daughter and a variety pack of silver based sons (until blue roan Keiga).

We recently sold Rohan to a wonderful lady in Colorado where he seems to be doing well.  My daughter's two Ivan and Cookie are also for sale as she's lost interest in Minis.  As circumstances dictate I reduce the herd, I've regretfully agreed with her. (My ET's babies Sissy, Una and Ray are not for sale - lol - although I think Kiega needs to go before I get attached!).

So ET's been just hanging in the broodmare herd with her siblings, daughters, grand-daughters and her dam until last year in 2009.  Apparently she took it into her head that Ringo would make an excellent choice for her to have a foal with, and backed up to the round pen were he promptly obliged her!

The Kiega story we wrote about earlier, but the look of smug satisfaction on her face was very evident.  She pulled it off well, surprising us all with her little gift!.

As ET is one of our backbone mares, we've never been able to retain a son for any part of our breeding program.  Beside's her, we have a half sister from her dam, numerous nieces from her sire side siblings and downline from them.


What she thinks of the service here - ROFL! 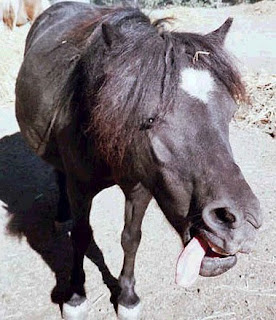