Had Tomas out yesterday to trim. As we only had ten to do, it went fairly quickly (less than three hours!)

The two guests here, Lalique and Charm are doing much better.  They've dropped a bit more weight and they're both able to finally get around without incredible pain.  Charm can actually take real steps versus hobbling everywhere.  She still has a long road to recovery and soundness but seeing her able to walk is wonderful.  Lalique thinks she's fine and desperately wants out with the rest of the herd.  She's looking better, and can stand and bear weight correctly on her front legs.  She can actually walk fairly well, but her one front hoof, well we're not risking until Tomas says she's as close to 100% as he can get her.

I'm very pleased to see both of them getting the sparkle back in their eyes and showing an interest in everything going on here. They both should full recover over the next year.  I'm going to be so happy to see them able to run and play again one day.

I forgot to take photos of them, but I want to show the wonders correct trimming can do for a horse.  I'll post next week the before and after.


The boys were also in spectacularly good moods so it went very smoothly with them.  They're all really good anyway, but even Hot Topic who hate's being caught actually stood for me to put his halter on.

That's a big deal for him, as we're overcoming a strong personality with a lack of handling (my fault completely), but he's coming around really well.

He's still a handful, but is improving every time we get our hands on him.  He's definitely as smart as Callita's line has proven to be with much of the peppery personality his siblings have. 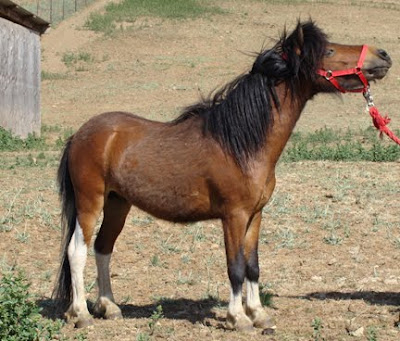 As he was being so good we didn't check to see if his other testicle had descending, but I couldn't see it.  So I'm classing him officially as a cryptorchid as he's now a full three.

I know this is suppose to be genetic, but his full sibling (Sunny) had both, as did his half brothers from his sire (Miramax as do all the others from Miramax's line that I know) and all his half siblings from his dam.  His dam, Callita, I've had extensive experience with over the past eleven years (five generations downline) and none have retained a testicle either, so I'm not sure what to think with this guy.  It could be hidden there, but until he's completely sedated we won't know for sure.

He'll be gelded this fall, and we're tempted (as much as I hate showing), to take him out as he'll be a very competitive gelding.  This isn't a good photo of him, he's really gorgeous.  But then who doesn't like a blue eye'd bay? We can see his future halter, performance or driving.  He's got the energy and smart as a whip.


We let the boys in part of the yard to munch on grass and our various edible weeds (not Demon, Ringo and Miramax the fiesty group had to stay out and eat alfalfa) after trimming and to remove the awful dewormer taste - lol!  The rest of the boys all get along well, while the other three have a tolerance for each other.  They'll hang out, eat together, but heaven forbid you go near their section of the fence they've claimed - lol!

Miramax will be leaving soon to go out on a short breed lease (he is still for sale, but will be unavailable for a few months), and I'm not sure if/when Demon is going to leave - I'll miss Demon badly - but we're just not utilizing him as he deserves to be for breeding or showing.  He's such a super guy.

It will be strange to have so few boys, even for a few months, but then by the time Miramax is back, Kiega and Bruiser will be ready to meet the big boys.  Thank goodness Ringo loves foals and is a super babysitter.
Posted by Wesco Farms