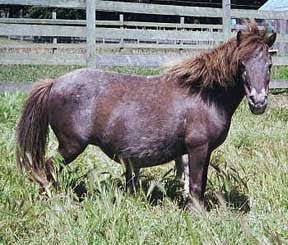 Maria (pronouced Mariah for some reason, that's what I was told and she's always been!), is our most senior mare here right now at the very active age of 24.

Maria was bred by Lois Anderson of Tanglewood Farms, of the wonderful driving horse fame (check out their site - training Minis to drive since 1973!  Definitely one of the best driving trainers in the USA).  Maria passes this movement to her daughters and we're really looking forward to seeing more of it in her down line.

Maria produced eight AMHA registered foals since her first daughter, Florita, in 1992 with many of her daughters going to breeding programs around the country.  She joined our breeding program in 2002 and has produced two daughters for us, Holly (Wesco Farms Diablos So Chic) and Patsy (Wesco Farms Demons Checkered Past) in that time.  Holly has gone on to join the breeding program at Imperial Acres, while Patsy is still here, hopefully bred to Topper (WCR Top Cop) for 2011. 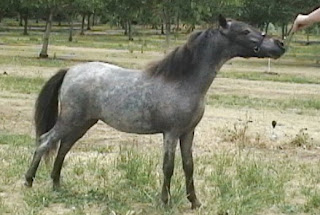 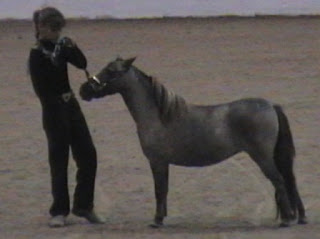 In 2005, while Patsy was still a weanling, Maria sustained an eye injury (our second that year) that required her eye to be removed.  It was really sad to see her return back and lose her position in the herd. As we planned on retiring her after that we let her "keep" her last foal.  Maria was all for that and finally weaned Patsy at the age of four!  Maria was the typical over-protective dam with Patsy up until the bitter end this year, separating Patsy from her dam to go in for breeding.  Maria has not een able to tolerate Patsy being away from her even for trimming, but she's settled down now since relocated her in with our other senior mares - Callita and Chiclet.

We have been observing Maria as potential pregnant as with our 2009 fence jumping boys she's looked suspiciously lopsided bellied. But as we head into Fall, I'm going to put it down to being in good flesh for 24 years old!

Our funny story for Maria.  On our website (I know it's still not ALL up again), we had photos for recognizing Appy markers on the various body parts.  Well, apparently some man arguing with another in a forum - not horse related - was using one of Maria's photos to insult the other guy every time he'd post.  The gentleman that was being harassed asked me to removed the photo.  I didn't but did block the page from easy downloading.  This was the pic - 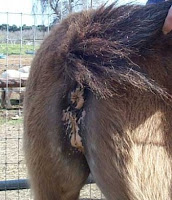 A new book on color genetics
just out in May 2010