Half the horses scheduled to be trimmed, vetoed by standing on top of the hill watching us, refusing to come down.  My teen age broodmares are hard to trick once they've seen the farrier and with 63 acres to outrun us, we don't play the chase game!

We of course had the volunteer group that love pedicures and for some reason think de-wormer tastes good.  They'll literally follow you around trying to get more - go figure.

Good news, Woody (one of the original three and the W in Wesco) is improving!  Big yeah and made my day!!! He's been foundering on/off for the past year and in early May it looked like he might start rotating, so we thought it might be bye bye Woody time.  He's dropped alot of weight and we're trying to keep him off any new grass (the sugars), but his white line is improving and the new hoof growth is coming in at a better angle.  So, we're hoping to keep him around.  I'm already formulating the 'winter/spring' Woody management, as being so temprate here we don't really stop growing grass even in the winter.  So, I think he'll be in a smaller grass free pen with Silhouette as company.  That's the plan for now at least.

As for hoof issues.  Tomas showed me exactly what we're dealing with so, I thought I'd share the pics.  I know personally I can say he's 'foundering' but exactly what it looked like I wasn't quite sure.  I'm more familiar with colic (when someone says colic, I'm well what kind? Gas, blockage, upset stomach???)  Founder though, I know is metabolic (as Tomas says like a person with diabetes), but I've never had to deal with a horse with these issues.

This is what Tomas removed today off Woody's hoof.

Woody grows very thick hoof very fast but horrible angles (no heel), so Tomas is rasping the front and taking off quite a bit to try to get his angles to improve too.

You can see the reddish part, it has cracks which would have eventually separated the coffin bone from the hoof wall. 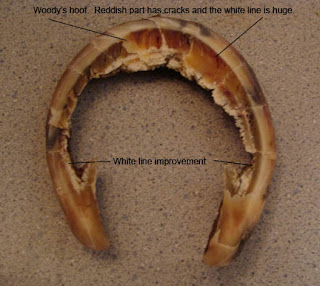 The white line on the bottom is dry, crack free and small, what the farrier wants to see. 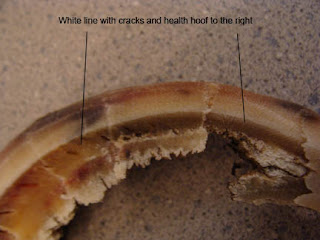 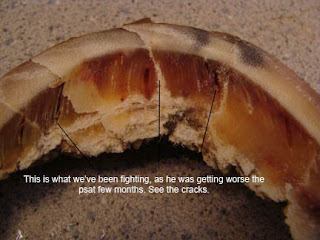