We're on the downward side of 2012, the economy sucks, hay prices are high ($14 a bale here), drought is predicting higher food prices and we have a presidential election coming up with two candidates that, well I wish there was a third.

But other than that life is good.  It could be better, but it could be a hell of a lot worse!

We've been fortunate this year, as we've exceeded our goals on reducing our herd number.  We started 2012 with 52 Minis and are currently at 30. That definitely was more leaving to new homes than I'd hoped for, so yeah!  We still have a few left on the sales list - three of the nicest colts/junior stallions we've produced as well as a couple of under 28" mares and one retiree.  There are a couple other mares I'm considering selling, but haven't made it up for sale yet!

I'm very excited to see what some of the horses that went to other breeders produce in 2013 and on, plus it's great to have new (and old) friends planning breeding and training with horses that we've raised.  Always nice to think you're going in the right direction!

So where does that leave us?

It really is nice to be in the ballpark of what I'd planned to have as our total Mini herd back in 1999. Too bad it only took 12 1/2 years to get there!  What a roller coaster of learning it's been. You sometimes wish you could have a do-over, but I'm not sure what I'd change. I figure for each negative there have been some immense positives. Horses I wouldn't have, friends I never would have met, etc.

One getting caught up on all the outstanding registration paperwork before the end of the year.

Two, as we chose to NOT breed in 2012 as we were reducing the herd numbers (although Ringo did jump the fence one day, so we have have some Ringo 'gifts' in April 2013), we are considering breeding in 2013. Which ones and how many will really be determined by the economy more than anything.  I tend to see-saw between breeding the proven mares and breeding the ones I've never bred (some are past five years old now).

Three, my never-ending search for the perfect stallion. I really don't see me getting another stallion until 2014, but I'm keeping my eye out.  I will eventually find that under 31" bay or black homozygous pinto, proven, aged 3-11, double registered, with a show record stallion one day!  Yeah, I know not sure 'exactly' what I want right? lol  That and hopefully adding another mare or two over the next year or so.

Four, rejoicing in a lower feed/farrier bill for the remainder of the year.  It does look a bit empty out here, considering in 2010 I had close to 70 Minis.  That is another consideration come Spring 63 acres of spring growth grass and less than 30 Minis - founder may be a concern for the first time. So, I'm thinking on how best to rotate horses around to avoid that.


Just because - here's a couple of photos.

Kind of hard to see, but that's Noomi and Cleo (Great Pyreness) watching the road. From this hill they can see out to our road and behind them down to house and up/down to where the horses are.  They so darn smart! 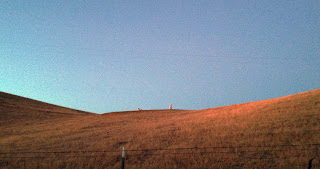 Binks - unbrushed/ungroomed waiting for his farrier trim.  Excuse the crap in the background, we were doing some down/dirty registration pics and of course he looked pretty nice.  If we'd had him 'posed' somewhere scenic, I wouldn't have got two that were decent! 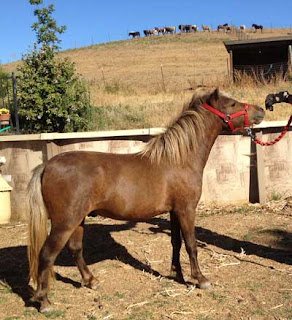 You can see the mare/gelding herd up on the hill watching and waiting for breakfast.

Baby Tox, being tormented by the humans.  His first trim (we missed his original appointment) and halter trauma.  He was 100% sure I was going to eat him, but what a fiesty little guy, he really thinks he's all that and a bag of chips! 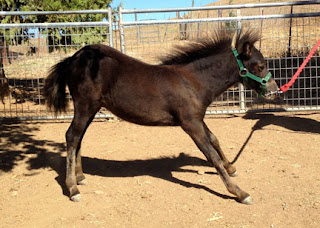 Tox (Wesco Farms DN Gamebreaker) we 'thought' was black at birth but he's turning into a gorgeous dark bay.  He has the 'tude and movement to be a wonderful show prospect.  Now to get some decent photos of him.


Hi – Will you please post a link to your Blog at The Miniature Horse Community? Our members will love it.
Members include: Owners, Breeders and Lovers
It's easy to do, just cut and paste the link and it automatically links back to your website… it’s a win win. You can also add Photos, Videos and Classifieds if you like. It’s free and easy.
Email me if you need any help or would like me to do it for you.
The Miniature Horse Community: http://www.vorts.com/miniature_horses/
Thanks,
James Kaufman, Editor