Nothing like waking up to Litte, Topper, McLuvin and Zydeco cruising the backyard.  I'd let them in next to the pool yesterday to do a bit of 'mowing', well apparently the new gate was not Demon worthy.  So, found the four of them in the yard; the gate to the front yard is open; no sign of Demon or Ringo.

Weirdly no screaming, "I'm a stallion and the mares are right here either"!  Hmmm.

Ringo finally pops his head out of the shelter, apparently he'd missed out on the breakout.  I close the gate on him and he's completely put out, once he sees they're in the yard within feet of the mares.  Oh well.

Now to get the gang out of the backyard. I spent 25 minutes trying to dislodge the quartet to no avail.  The clever use of landscaping, they managed to run circles around me - literally!  I finally turned the sprinklers on hoping to corner them close to their exit.  No joy.  McLuvin cracked a sprinkler head on one of the gallops around the yard, so now I have a geyser in the backyard, and we're all soaking wet while still playing the circle game.  Not a good idea the sprinklers.


McLuvin (sire Little behind him covered in mud) 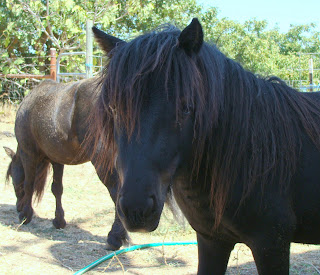 Enough is enough.  I dump the water bucket in the backyard, if they get thirsty they'll have to go back to their pen to drink.  Hopefully what little landscaping I have will survive them, but they're enjoying seeing my feeble attempts to catch them way to much!  Maybe putting their feed out will entice them.  Not!!!  Fresh grass versus dried alfalfa, no contest with my horses.

Still no sighting of Demon.

I'm fairly certain he wouldn't take off - not with all the mares around.  So put hay out for the boys.  Feed the hobbler crowd (Woody and Charm), and spy Demon flirting with the mares by the hay barn.  I go grab a halter and by the time I get back he's standing at the hay cart, apparently bored with his escapade.  Halter him, taking him back in with Ringo when he now notices Topper and Little in the backyard.  They're a fenceline CLOSER to the mares! Oh NOES! 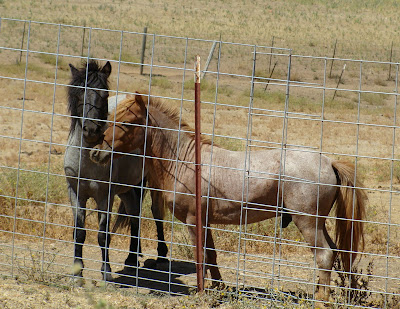 Peace is restored, no OMG foals were created, and the boys have drifted back towards their pen.
Posted by Wesco Farms