More Inbreeding & Linebreeding
This is a bit more math involved and about breeding Aussie's, but the same principles/rules apply to breeding Minis.
Playing COI: Using inbreeding Coefficients by C.A. Sharp
Breeding dogs is a numbers game. Even though math problems are the last thing on your mind, what you are doing when you breed is calculating the best odds for getting a desired result. But a little applied mathematics, in the form of a coefficient of inbreeding (COI) can be helpful and even enlightening. Now that technology allows even the mathematically challenged to put them to use, they are a tool that should be applied by every breeder.

Research in the fields of genetics, immunology, and veterinary medicine, is turning up more and more information indicating that high levels of inbreeding can have deleterious effects on health. Inbreeding depression, a complex of behavioral and physical reproductive problems, have long been recognized. Inbreeding can increase the frequency of a disease in a population, sometimes quite rapidly. Inbreeding leads to increased incidence of immune-mediated disease and cancer.

But, all pure breeds of domestic animals are inbred. (Keep in mind that to a scientist "inbreeding" means the breeding of related animals, which would include what we call "linebreeding"). But how much is too much? Without it, the breeds could never have been developed and would not breed true to type.

However, almost all breeds of purebred dog already have well-established type. There is no mistaking a Chihuahua for a St. Bernard. Or even a Greyhound from a Whippet. Given this, breeders would be well advised to retain as much genetic diversity as possible within the existing breed population in order to avoid or reduce such unwanted health problems as those mentioned above. Along with screening and maintaining detailed health records, another tool available to you is the Coefficient of Inbreeding. Track COIs on your breeding stock. Calculate them on proposed matings, with an eye to keeping the numbers low if they already are or lowering them where possible.
Read the rest of the article here (highly recommend if you breed!)
Playing COI: Using inbreeding Coefficients cont.
Posted by Unknown No comments:

It's been cold here, okay not as cold as other areas in the country/world, but for the valley in Northern California it seems colder than normal!  I'm wrapped up like I'm in Siberia most of the time.  I think I'm starting to get the 'snow-birds' idea of heading to warmer climates in the winter - lol!

Monday was extremely bitter cold hovering right at freezing, so had to snap a few pics.  The first is a saw I'd left out overnight (sawing down some very aggressive vines) the other is Fraiser one of our Aussies.  I tried to catch the sun coming up against all the frosted everything, and one of our dogs Sabrina, she actually had frost on her back (she was on coyote duty), but nothing came out well, so delete! 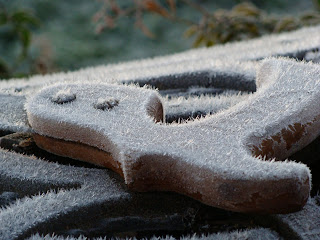 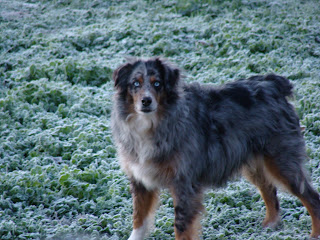 The horses seem to be bearing up well in the cold, and fortunately the buckets aren't freezing solid every day. Today I caught Binks and Bambam right after they were done playing having a nap - they're so darn cute, although I'd gladly pass on every having Fall foals again.  Now to get my mares and stallions to read this little FYI!!! 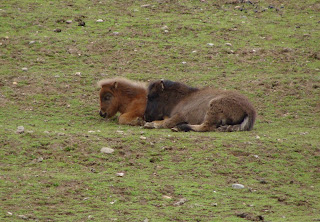 Over the weekend I did have a surprise.  I was out feeding and as I'm walking along talking to the mares and giving the visual once over as I head towards the hay barn, I notice Cookie has developed a white star.  Surpise!  Not Cookie.  Somehow Una managed to get into another pasture and we still don't know how.  No holes in the fences or gates and Una is a good 37", so how she managed is beyond me.  Since she hasn't weaned her now two year old daughter, Blessings,  so I think good idea a bit of separation.  Apparently that's what I thought...

Surprise! Guess who's in with mom Monday morning?  However they achieved this, it was a one way deal as they haven't left yet and we really can't figure out how.

IMHO, I think Una is trying for a repeat with her true love Ringo.  She's staring at him in this photo.  Tomorrow is eviction day.  I've explained to Una that all the 'plan' is to re-breed her to Ringo in May and we don't want anymore winter foals. I hope she was listening.
Posted by Unknown No comments:

I've been putting thinking a lot about my Miniature Horse business, and how far it's derailed from my original "plan".

Back in 2000 after I realized I was hooked and wanted this to be a business, not just a hobby, I had a written plan for Wesco Farms as well as the horses I owned and what I wanted in any additional herd members.  Did I follow that, sadly no, well sometimes, but I got myself in way over my head and did things half-ass backwards.  I tease a couple of friends about my 'horse experience' being in the trenches, versus the ivy league school learning.  What has come from all of that is I do know what I do and do not want to be!

Another issue I've had being a 'business' is, unfortunately when your 'business' isn't your sole income, I don't treat it as seriously as if I was going to work and being paid a wage.  That has to change.  Mentally more than anything. I use to hold the bar a bit higher than it has been the past few years. Time for a change!!! 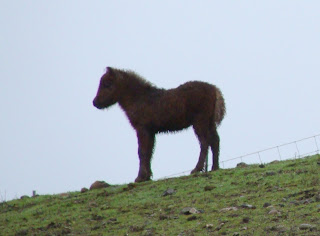